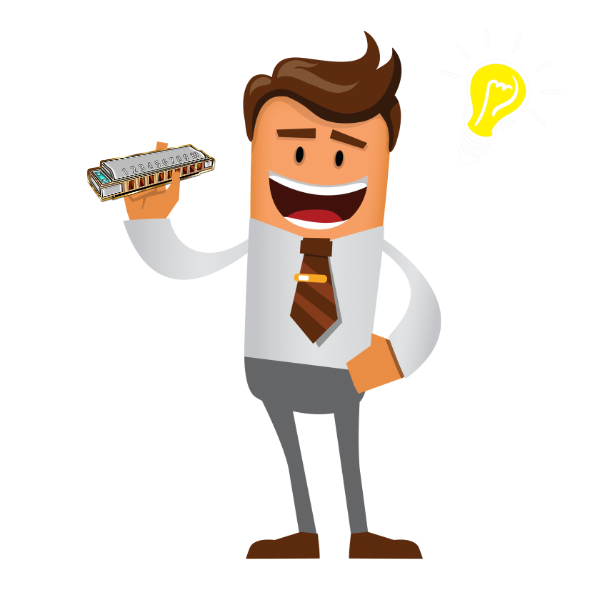 I wonder how many people out there are aware of what it’s like to play an instrument for many decades, and then have to go back to the drawing board and fundamentally change their entire playing technique. I count myself as one of those people, and I don’t mind admitting that it involved a lot of hard work to “unlearn” those decades of playing things the wrong way.

My hope with this post is that I help one or two people to avoid the trap I fell into, and save them a lot of time.

I take solace in the fact that at least one extremely well-known jazz harmonica player admits to having had to go through the same process, and I would venture to say that many have done the same, and many more have yet to come to: THE REVELATION.

To explain what I’m talking about, we have to first examine some unique characteristics which make our instrument, the chromatic harmonica, uniquely challenging:

With all the other wind instruments, such as the saxophone, flute, clarinet, trumpet, etc., the player blows, chooses different fingerings, and the different notes come out. I know that is a simplification and there are embouchure changes, but that is the essence of what is happening. This means that it is very easy to create legato (smooth) lines. In fact, if the player wants to articulate the note, they have to tongue the beginning of the note. Continuous notes on those instruments are, by default, legato.

The harmonica is unique in that we create notes by blowing and drawing. This makes it extremely difficult—if not impossible—to play a series of legato notes if some of those notes are blow, and some are draw. Another thing which is unique to the chromatic harmonica is that, in each octave, we have duplicated notes. To be precise, in each octave, we have two Fs, two C#s, and three Cs! See the list below:

I would venture to say that many, or most, beginner to intermediate players simply settle on one of the ways to get that note, and stick with it. In other words, whenever a C is needed, they always blow hole 5. Whenever an F is needed, they always draw hole 2. I know I did, and I did it like that for too many years!

However (and here, finally is the “revelation”, for it comes to some players as such), we need to be choosing whichever version of that note allows us to continue with the breath direction of the preceding, or proceeding note.

By intelligently choosing a version of the note which permits minimal changes of breath direction in the line, we can achieve a much smoother line.

Take a look at this series of notes:

If we were to play that line by always choosing the F which is hole 2 draw, and end on the C which is hole 1 blow, we would have (count them) eight changes of breath direction. This is not an easy line to play smoothly. We’re panting like a hyperventilating sparrow!

Now, let’s play the line again, but this time we’ll play all the Fs by blowing hole 2 with the slide in, and we’ll end on the C which is hole -1 on a fourteen hole chromatic. That’s now exactly one change of breath direction! If you’re playing a twelve hole chromatic, then the last C will have to be a blow on hole 1. Even this will make it just two changes of breath direction. Can you feel how much smoother the line is when played this way?

This is just one example of what a dramatic difference position choice can make to a line. Similar instances occur with any lines that occur around C as well. Basically, with any series of notes which go blow-draw-blow, or draw-blow-draw, take a moment to think if there is a version of the middle note which allows a continuous blow, or a continuous draw.

So, what to do if this was a revelation to you?

Well, I have to tell you that you have a bit of work ahead of you. Personally, I would estimate that it took me about three months of solid daily practise before I could “unlearn” the years of doing it the wrong way. Here’s what I found to speed up the process:

If this was actually no revelation to you, and you have been intelligently choosing the note positions all along, congratulations, I think you may be in the minority. If this was a revelation, don’t worry. It is possible to get out of bad habits. The longer you have been playing inefficiently, the harder it will be, but it will be worth the effort, I assure you!

I only wish I had a teacher way back then to have pointed me in the right direction!


←The Case for the Harmonica Sheltering in Place→